“I love the word ‘fate.’ You know how they talk about ‘fated encounters.?’ Just one single encounter can completely change your life. Such special encounters are not coincidences. They’re definitely . . . fate. Of course, life is not all happy encounters. There are many painful, sad predicaments. It’s hard to accept that misfortunes beyond your control are fate. But I think sad and painful things happen for a reason. Nothing in this world is pointless. Because, I believe in fate.”

Ringo Oginome is a complex character, steeped in guilt, longing, love, and later, forgiveness. Her many facets make her not only tolerable within the scope of Mawaru Penguidrum, but wholly lovable, despite her introduction in the series’ second episode as the stalker of the Takakura brothers’ homeroom teacher.

She’s introduced with a grand speech about fate, rivaling the iconic opening monologue from Shouma Takakura in the series premiere and the equally passionate closing words of his brother Kanba that bookend the episode.

She’s also introduced with a toilet flush, stars wafting from the bowl like a lingering, undeniable stench. 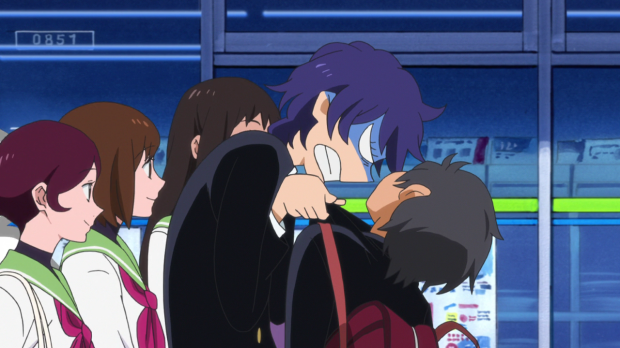 Prior to her official introduction in Episode 2, Ringo is shown twice in the premiere itself. She appears in the opening sequence, foreshadowing later events, and again towards the end of the episode in a comedic visual call-out reminiscent of Kunihiko Ikuhara’s former co-worker Takuya Igarashi. Igarashi was influenced by Penguindrum director Ikuhara when the two both worked at Toei Animation on the Sailor Moon franchise. The comedic Igarashi arrow is now a visual staple of his work, taken from Ikuhara’s style and made his own recurring watermark.

In Penguindrum, Ikuhara uses an exclamation mark to call viewers’ attention to Ringo’s importance. This is reinforced by the fact that she, and her two classmates, are already unique human figures, drawn to stand out against the regular passerby: a white icon of a person. As Ringo passes Shouma on the street, an exclamation mark pops in front of her with a small audio cue. Pay attention. This girl is important. For good measure, she turns around briefly for a close-up of her face.

The next time we see Ringo, she is preening in a women’s restroom, glaring at a random woman in that same restroom, and romanticizing fate. Unlike the Takakura brothers, Ringo gushes about how much she loves fate.

This is framed by her jealousy towards an unknown woman in the mirror next to her, the initial toilet flush, and mention of triple-lace underwear. Penguindrum makes it clear from the moment we hear Ringo’s own perspective that she relies heavily on the idea of fate to explain why things happen in her life. As her story is slowly revealed over the course of the first season, Penguindrum batters Ringo’s idea of fate over and over, pressing her to deny its existence.

Concurrently, Ringo does the bulk of the series’ comedic heavy lifting. Like Nanami Kiryuu (Revolutionary Girl Utena) before her and Lulu Yurigasaki (Yuri Kuma Arashi) after, Ringo is both the butt of a joke and a source of tragedy. From the get go, she is eccentric — scaling the side of a building to take a picture of a bird’s nest and camping out underneath  so she can stamp another day accomplished in her fate diary. She’s also one of the few characters who occasionally dabbles in breaking the fourth wall. Her Episode 1 cameo features the pop of an exclamation point for the audience. The stars that follow her from the bathroom stall in Episode 2 later turn into a mosquito that she swats away in Episode 7. When stars follow Ringo, they’re often placed directly into Penguindrum‘s universe as concrete, undesirable objects like a lingering smell or a pesky mosquito. In the immortal words of André 3000, “I know you like to think your shit don’t stink but lean a little bit closer, see that roses really smell like poo.” 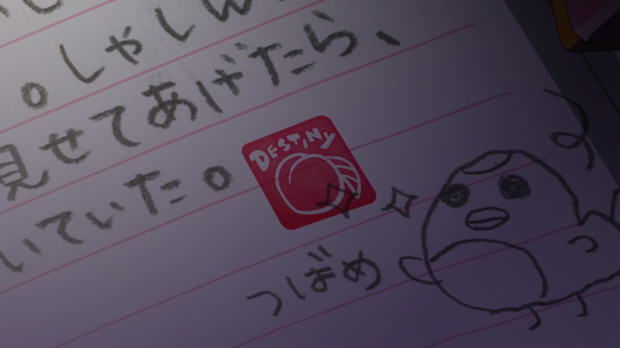 Yet, Ringo isn’t a Caroline. She is aware that her shit stinks, unsuccessfully burying her internal pain from her sister’s untimely death and the fracturing of her family, into a doomed mission to carry out what she believes to be her sister’s wishes. Her actions only become more ridiculous following Episode 2, making her that much more of a tragic figure as she desperately ignores her own desires and doggedly squeezes everything into the parameters dictated to her on the page.

Ironically, while Ringo attempts to fit everything into the instructions given to her, her fated encounters do happen. On the day that we meet her, so do the Takakura brothers — more specifically, Shouma — a meeting that changes her life. It’s the first step on her journey to realizing that she does believe in fate, just not in the way that she first does when we meet her.