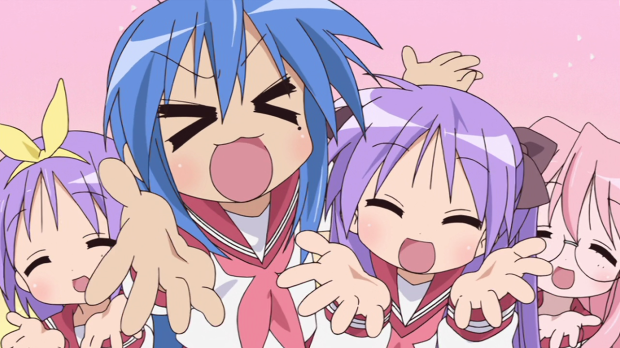 A few weeks ago I pitched a podcast idea to a few friends. We would revisit an old anime to see if it was rewatchable or not and additionally, as one of the friends’ anime experience was and is fairly small, whether it was accessible to an uninformed audience.

This premise isn’t to be confused with the many wonderful anime podcasts out there that genuinely cover older, more vetted material like Anime Nostalgia (who just did a great recommendations episode on older manga) as a recommendation source. Instead, it’s more of a tangentially-related aside at specific genre pieces from the past ten to fifteen years.

My first suggestion was the 2007 Kyoto Animation adaptation of Lucky Star. 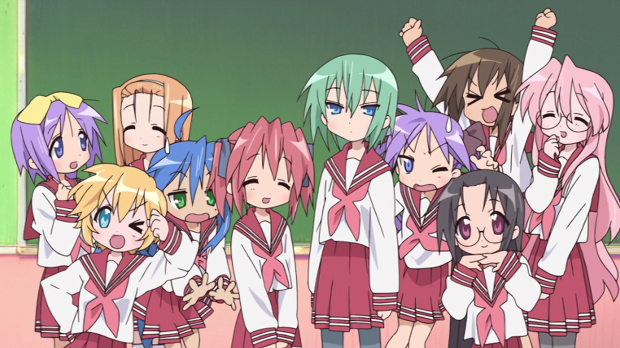 I recommended Lucky Star for our first watch not in spite of, but because it’s so tied to one specific time in anime history. Its initial buzz owed much to the then-recent success of Kyoto Animation’s adaptation of The Melancholy of Haruhi Suzumiya and less obviously or overtly-referenced, the success of the 2002 J.C. Staff adaptation of Azumanga Daioh. When I first watched Lucky Star, it was a year or so after it’s release and immediately after I had finished the first season of Haruhi. Haruhi was so immensely popular that everyone was waiting for a second season as soon as possible and Kyoto Animation announced the Lucky Star adaptation during Haruhi‘s run.

From the opening moments of “Motteke! Sailor Fuku” a nonsensical song with a dance designed to become a memetic hit like Haruhi‘s “Hare Hare Yukai,” Lucky Star was courting a specific, informed audience (i.e. people who were waiting for another season of Haruhi to be announced). As an anime fan who was just getting into watching recent shows that hadn’t been curated for me by Cartoon Network’s Adult Swim and had just watched Haruhi, Lucky Star was fun and enjoyable. I got enough of the references (probably less than a third of them if I’m being honest) for it to be a funny addition to my ongoing anime education. From there, I went on to watch Azumanga Daioh and loved that more for its stronger characterization and more esoteric episodes.

Although I expected Lucky Star to be impenetrable now, I still underestimated how inaccessible it would be for anyone who hadn’t seen Haruhi, watched any Kyoto Animation series, or even had any sort of experience with 4-koma adaptations or manzai routines.

Each episode is also packed with Japanese culture references, other anime and/or manga references, and hyper-specific voice actor and actress references. For many jokes, the audience is expected to recognize voices since their inclusion is part of the joke. Aya Hirano as Lucky Star‘s Konata Izumi attending an Aya Hirano concert where she performs “God Knows” from Haruhi since she was Haruhi‘s voice actress is probably the easiest example to point out but there are many more.

One of the more entertaining Lucky Star bits is the ever-rotating ending, where various characters from the series sing karaoke to popular songs (often from anime or with a well-known anime tie-in) but this too relies on the audience recognizing where the songs are from.

The initial joke of Minoru Shiraishi as himself in the series’ closing segment, “Lucky Channel,” relies on whether you know him as Taneguchi from Haruhi or not (although as he and disillusioned idol co-host Akira Kogami develop their own rapport that becomes one of the best parts of Lucky Star). Revisiting the existence of Minoru Shiraishi in 2020 is uniquely depressing when you learn that he underwent treatment for facial paralysis in 2015 and hasn’t done many roles since.

An odd addendum to this is the entire in-universe existence of Akira as a jaded idol. Her volatile mood swings between overly-cutesy teen and exhausted cynic are something I found amusing when I first watched, but now it looms over the Lucky Channel segments with a darker tone — especially considering Aya Hirano’s career. (To be clear, Aya Hirano isn’t voicing Akira, but her subsequent “scandal” adds an additional layer of nuance in the year 2020.) To top it all off, the years also add context to Lucky Star director Yutaka Yamamoto’s firing after four episodes.

Lucky Star isn’t the only series to age gracelessly due to extenuating circumstances, but it was already such a hyper-specific time capsule of a series even while airing and the passage of time has made this all the more true. 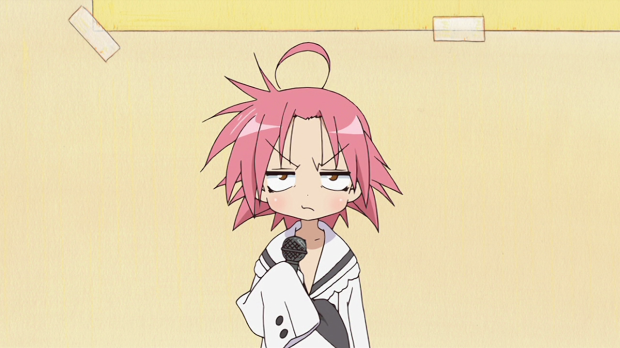 My friend who hadn’t seen Lucky Star or Haruhi was completely lost, leaving it up to the three of us to explain that not all 4-koma adaptations are like Lucky Star, and even the manga itself wasn’t nearly as reference-filled. The manga is more character-focused and has a relaxed slice-of-life feel which makes the characters if not more endearing, at least like actual people. Kyoto Animation’s adaptation “elevates” the original material by including myriad references, leaning in on labelling Konata Izumi an otaku and using her as an audience stand-in.

A byproduct of this is that the other Lucky Star main characters — the Hiiragi sisters and Miyuki Takara — feel more like a collection of moé tropes for Konata to point at and be like, “Hey, you sure are fulfilling this otaku stereotype,” with the expectation that the audience will find it amusing. Konata’s relationship with Kagami Hiiiragi approaches something more genuine in the back half of the series, but because the series is so reference-heavy, character development suffers. When partnered with the girls’ mundane conversations (the most famous being Konata’s chocolate coronet discussion) it gives the viewer little reason to care about them despite the fact that the conversations themselves are realistically banal.

Ultimately, Lucky Star is rewatchable with the massive caveat that you are already an anime fan who saw this as one of their first series and/or have an existing attachment to this very specific point in anime history. This specificity has an effect of making it more personal to a select few, unifying a certain subsection of anime fans who share that viewing experience. Just yesterday, a 38-second video clip from Lucky Star was the top post on the anime subreddit, but the vast majority of comments were from people who had experienced Lucky Star at a formative time. I have an attachment to it because it was recommended to me as a must-watch following Haruhi, and rewatching it (admittedly we only made it through four or five episodes) made me think about how anime is curated today as opposed to even five or ten years ago.

When I first began getting into currently-airing anime, there were myriad blogs and websites as well as Twitter in its infancy, where people would recommend older series or favorite recent series. Some of the first series recommended to me were Clannad, Toradora, Honey and Clover, The Melancholy of Haruhi Suzumiya, and Lucky Star. As I delved more into the online anime community, I found entire podcasts and blogs dedicated to recommending older works like the original Gundam movie trilogy and Patlabor, or even more recent gems like Mushi-shi. There was a level of curation that has all but disappeared in the current social media climate where everything is available to stream and discussion is skewed towards instant reaction, particularly in short video form. Returning to Lucky Star reminded me of this and additionally made me realize just who ended up shaping my initial foray into watching anime as it aired.

I personally will always have a soft spot in my heart for Lucky Star, but I will never recommend it to anyone ever again.