The opening moments of Land of the Lustrous feature an isolated Cinnabar huddled on a rocky outcropping. After a moment, they begrudgingly say that it’s time for work. Cut to the daytime, where Cinnabar is nowhere to be seen, but a group of gems runs across a field before one of them, Morganite, stops and calls out for Phosphophyllite. Their leader, Master Kongou, is looking for Phos.

Whimsical music feeds into our natural curiosity about this world. After Phos and Morganite banter back and forth a bit, Morganite is off to fight the Lunarians with their team and Phos goes to Master Kongou. The entire sequence gives us brief, distilled splashes of each gem’s personality. Cinnabar is sequestered and lonely. Phos is capricious and immature. Morganite is confident and decisive. Jade, who Phos passes en route to Master Kongou, acts like an amused older sibling.

In Episode 12, this sequence is revisited — the same musical cues, the same sweeping camera pans, the same players take the stage. Phos’ transformation takes most of the spotlight. It’s easy to see how much has changed for Phos throughout the series. Land of the Lustrous diligently follows every step of Phos’ physical and emotional metamorphosis. Yet, the series isn’t only about Phos. Pulling the camera back a bit reveals all of the gems in Phos’ periphery, all transformed by events in the series.

Much is made of the gems’ inability to change. Dia laments the gems’ static nature as they watch Phos’s physical transformation and when events force their hand, it leads to a much-needed heart-to-heart between Dia and their partner, Bort. This conversation has been a long time coming — possibly a hundreds of years in the making, given the gems’ immortality — but it’s not until Phos begins to push the seemingly static boundaries of their gem body that the other gems start to react and respond accordingly. As expected of beings that cannot die, the gems naturally lack the weight or gravity that a human would have in most situations.

Morganite begins the series as one such gem. On patrol with their group, Morganite opens Land of the Lustrous by teasing Phos when their partner, Goshenite, interrupts with news of Lunarian sunspot activity in the south. Rather than going immediately to Master Kongou as expected, Morganite tells Goshe that they don’t need to alert their leader and that they can take on the Lunarians themselves. Morganite’s arrogance nearly leads to their demise before Master Kongou — alerted by Phos — steps in and stops them from being captured. When this scene replays again at the end of the series, Morganite again calls for Phos before they are interrupted by Goshe with news of Lunarians. What happens next occurs off-camera, but due to the fact that we don’t hear Morganite’s immediate response, it’s safe to say that Morganite likely learned and went to talk to Master Kongou like Goshe requests, or at least does things a bit differently this time around. 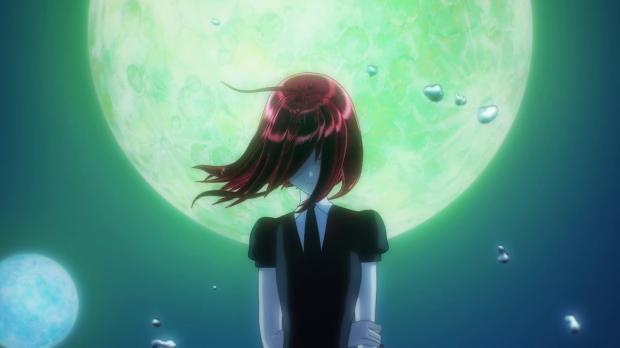 Like the opening scene of the first episode, the ending sequence of Land of the Lustrous‘ finale begins with Cinnabar. Once again we see a few shots of them in the cave where they have forced themselves into exile. One of the more tragic elements of Phos’ transformation is that they partially forgot their promise to Cinnabar and here, Phos finally arrives with promise of a new job, more driven by their genuine respect and admiration for Cinnabar than their former sense of empathy.

It’s an awkward conversation with Phos where Cinnabar does the emotional heavy lifting for the first time, revealing just how much Phos’ actions have affected them. Rather than forcing the issue — as Phos initially did while talking to Cinnabar in Episode 1 — Phos backs off, leaving Cinnabar’s raw emotions in their wake. In a stunted monologue, only half of which Cinnabar expresses aloud, Cinnabar shyly ends their discussion with, “If you just wanted to team up, well then—” instead of their usual caustic parting words to keep Phos at a distance. It’s subtle proof that Cinnabar is finally willing to meet Phos where they are, even if Cinnabar can’t actually put this into words.

Before the bookended camera pan through the fields with Morganite and Phos, Land of the Lustrous visits various gems to further set the scene. Life continues for the gems but a lot has changed across the series’ 12 episodes. Rutile organizes their shelves as usual, but spares a lingering glance to the sleeping Padparadscha. Dia pets one of the stuffed animals designed to look like the large Lunarian (Shiro), but looks out to see their former partner Bort and responds with a smile. Bort’s latest partner, Zircon, vows to rid themselves of their “spoiled old self.” Benitoite and Neptunite play rock, paper, scissors and Benitoite wins for what appears to be the first time. Jade reminds Euclase that it’s Master Kongou’s “meditation time,” only to have him walk past the two, surprising them both.

In the background throughout all of this is Phos. The first episode’s Phos is spoiled and stubborn. They check their reflection in the pond to make sure that they look cute. For emphasis, Land of the Lustrous has Phos walk past this image of their former self, expressing jealousy of their ignorance. When Morganite first calls for Phos, Phos is sleeping lazily in the fields. By the finale, Phos stands at attention, eyes on the sky for Lunarians.

Despite a similar — at times, exact frame-by-frame — sequence showing how the gems’ lives continue in similar fashion to when we first saw them, the purposeful visual delivery underlines just how much has changed, not only for Phos, but for each and every gem.