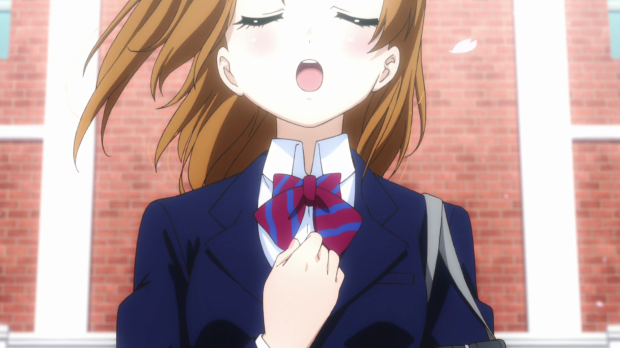 The opening sequence to the original Love Live! School Idol Project still charms me to this day. It was made back when Love Live! was a budding multimedia adventure and not the successful franchise it is today, the time period of its latest iteration, Love Live! Superstar!!. It features a shot that’s actually rotated in a spinning motion like you would rotate a photograph in photoshop. It comparatively janky, clunky, and sets an odd tone of fourth-wall-breaking stage musical style that the series continues for the entire season, despite the fact that it never returns to this Episode 1 moment where protagonist Honoka Kousaka breaks out into song like a musical.

It’s perfect. Director Takahiko Kyougoku knows how staging works, which isn’t something every idol show gets. He’s aware not only of how to use the figurative camera to give idols a better stage that even the most competent music show wouldn’t be able to do. And most importantly, he intimately knows the liminal space between the reality of a stage show and what it’s trying to project onto an audience, something that myriad accomplished movie directors have failed at miserably when turning musicals into movies. The first episode of the original Love Live! not only features Honoka’s movie musical moment, but a fantastic sequence featuring established idol group A-Rise as they perform on a dark stage that quickly becomes a pocket space that they own before cutting back to a stunned audience, watching them on a large screen.

You can see similar attention to the grandeur of Kyougoku’s panning shots in the opening sequences of Land of the Lustrous, which has a similar staged quality that draws the audience in immediately, and even his work on Korean pop-idol group TWICE’s music video for “Candy Pop.”

In the first episode of Love Live! Superstar!! we see this same exact understanding of staging. Kyougoku revisits his own franchise and uses similar staging to give Kanon Shibuya her own movie musical moment, all while presenting a world that’s both completely different from Love Live! School Idol Project and wholly familiar.

Kanon receive a similar panning up shot to introduce her singing, like Honoka does when she opens the first episode of Love Live! by singing “Susume→Tomorrow.” Unlike Honoka, Kanon isn’t in a bid to save her school (it already was saved and reopened). Instead, she’s dealing with being rejected from her school’s music program due to her own stage fright. Where Honoka’s sequence introduces her and the school in tandem before her “record scratch, you may be wondering how I got here” jump, Kanon is noticeably separate and has her moment while walking to school.

Kanon puts on her headphones and just starts singing in the street. Her feet hit the ground as a transition for her spin, which involves her animated as spinning rather than Honoka’s hilarious picture rotation in the first series. This entire sequence is a nice call-out to the first series while making it Kanon’s own as she gets more and more into her singing to the exclusion of all else. Superstar!! even pulls off the gag of how odd it would actually be for a girl to burst into song in the streets before using two passerby’s legs as the closing curtains for Kanon’s stage. It then hilariously transitions to the title of the series as Kanon joins the masses walking to school in the morning, and shows the episode title on a bus as she walks by.

The visual message is clear. Everything is Kanon’s stage if she wants it to be. Now it’s about adopting that same fearlessness that allows her to loose herself in the music while on an official stage.

With Keke’s help and encouragement, it’s obvious that she’ll get there. This is bookended by the end of the series, with a transition from Kanon yelling that she still loves singing, to singing the song that’s already begun to play (with her on vocals) and transitioning to the first episode’s ending sequence with the rest of her future idol group.